Santa is late this Christmas!

Santa was supposed to bring a bicycle each for my daughters this time around. But he didn't arrive in time for Christmas. The snow was perhaps holding him back. His assistant managed to deliver some chocolates with the glad tidings that Santa will come with the promised presents in a day or two. We don't have the Chimney for Santa to slide in, nor the stockings on the door (the cycles wouldn't fit in anyway!). But each year, Santa watches how the kids behave and brings sweet things they desire.
Does my daughter believe all this? Well, she likes to believe, though she knows that it's her mama and papa who play her Santa each year. I like the idea of Santa too. My parents gave me no such illusion. But the image of santa riding the reindeer sled through snow flakes and across skies, carrying gifts for children world-over, sliding down the chimney with his big fat belly on Xmas eve, leaving gifts in pretty stockings...well, some imagination, but I think children like to go with it, just like they love fairytales. And of course, they grow over it with time. 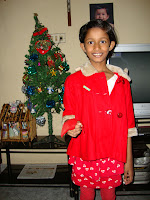 I had a lovely christmas with family and friends at my in-laws place - kids dressed as santa claus, christmas tree all decked up, twinkling stars & serial lights, bamboo crib with baby Jesus and the rest of the cast watching-over, a feast with rich plum cake, white forest, mom-made mushroom & cauli-flower biryani, pepper chicken not turkey (cooked on firewood for that smoked flavour), FIL-made naturally fermented nutmeg wine (2008), chocolate & butter-scotch icecream topped with apple and banana...and the works! 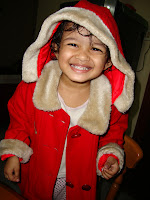 The only sad part was that Becky, my 2 year old, was unwell and couldn't enjoy it much, although she did try to play along. She's getting better though!
I'm now looking forward to the New Year. Hoping to start with a bang! Wishing you all a very happy and prosperous 2011!
This is in continuation to the comment I posted on Aparna's Blog. I should perhaps say "inspired" cause I've been so un-inspired and tied-up for the last 11/2 months, drawing a nil on my blogpost. So thanks Aparna, for bringing this post out of me :D
41 comments:
Email ThisBlogThis!Share to TwitterShare to FacebookShare to Pinterest
This post is about: Christmas, Daughters, Gifts, Santa Claus
Newer Posts Older Posts Home
Subscribe to: Posts (Atom)