My personal BHAG (For those of you who are not familiar with the term: Pronounced Bee-hag, abbrev. of Big Hairy Audacious Goal, it actually means a strategic medium-long term business goal that sounds audacious but is not impossible) had no "big hair" in it, though "audacious" had quite a few occurrences; I've had no fetish for long-straight hair at all! 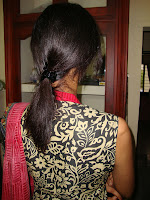 34 years of living with short hair, it sort of grew on me. Then a friend nudged me to grow my hair, and the parlour I went to for a hair-cut convinced me that I should grow my hair at least till shoulder length, saying it would suit me better (and would not make my neck look so lo..ong).

But as always, it seemed to take ages, and with growing frustration and falling hair, I finally gave up and rushed to the Salon to have my hair chopped off. The Tibetan hairstylist coaxed me to try straightening and I DID! My friends were just as surprised as I was to see that long hair didn't look too bad on me, after all!

But now my own wavy hair is growing out those smooth strands and I'm not too sure if I want to straighten it or have it cut short. With the amount of hair fall, one thing I do know is, if I chop it off, I'm never ever going to grow it back to this length again. So maybe (just "maybe") I'll give it one more go, try a funky hairstyle or something with my loooong hair (now it's grown a bit longer than what you see in the pic). BHAG, you think?

Will let you know, if I successfully get to keep my hair long, for a bit longer, and if the hairstylist (still hunting) can actually give me a funky hairdo, something that suits me!

Then one may be that, and three would be those,
Yet hat in the plural would never be hose,
And the plural of cat is cats, not cose.
We speak of a brother and also of brethren,
But though we say mother, we never say methren.
Then the masculine pronouns are he, his and him,
But imagine the feminine: she, shis and shim!

Let's face it - English is a funny (or should it be phunny) language.
There is no egg in eggplant
nor ham in hamburger;
neither apple nor pine in pineapple.
English muffins weren't invented in England!

We take English for granted, but if we explore its paradoxes,
We find that quicksand can work slowly,
Boxing rings are square,
And a guinea pig is neither from Guinea nor is it a pig.
And why is it that writers write but fingers don't fing,
Grocers don't groce and hammers don't ham?

Doesn't it seem crazy that you can make amends but not one amend.
If you have a bunch of odds and ends, and get rid of all but one of them, what do you call it?
If teachers taught, why didn't preachers praught?
If a vegetarian eats vegetables, what does a humanitarian eat?

Sometimes I think all the folks who grew up speaking English
Should be committed to an asylum for the verbally insane.
In what other language do people recite at a play and play at a recital?
We ship by truck but send cargo by ship.
We have noses that run and feet that smell.
We park in a driveway and drive in a parkway.
And how can a slim chance and a fat chance be the same,
While a wise man and a wise guy are opposites?

You have to marvel at the unique lunacy of a language
In which your house can burn up as it burns down,
In which you fill in a form by filling it out,
And in which an alarm goes off by going on.

And, in closing, if Father is Pop, how come Mother's not Mop?
And if people from Poland are called Poles
Then people from Holland should be Holes
And the Germans, Germs.

And let's not forget the Americans, who changed s to z, but that's another story.