He is big. He sports a rather gory shade of outfit and wears an ominous look that instantly spells danger. His usual garb - red complemented with cream or white. He maybe rash and reckless in his ways, but accommodates anybody who would dangle the thumb pointing upwards or put a hand out amicably.

Big brother would chase you around town, breathe down your neck, hoot behind your back, is always in a tearing hurry, goes many places on business, prefers to stick to his schedule and doesn’t care a damn of what his impatience would cost others. He wouldn’t mind scraping his butt against anything that came his way.

The cops don’t frighten him. The thugs neither. He was arrogant down to the letter t. Doesn’t let go of a challenge easily. And he seems to be forever on the run. Sometimes, we come close to having a brush, but I’m usually the one to let go. Until I see the tiny speck fade out into the distance, I pull up, take a few breaths, regain my composure, and set out to wherever it is that I was headed.

And yet, it seemed like a million people depended on him. In spite of all his erroneous ways. So big brother he stays. And he always gets to go ahead of me. I do not begrudge him, rather keep a safe distance.

He tried to give me a chase today. I was glad he was stopped by those amicable people who put out their hands for a ride. I honked twice to express my glee as I overtook him. He didn’t get a chance to get back at me, for I was home, safe from the clutches of the big bad brother of all roads in Kerala – abhi ‘bus’ kar bhai! 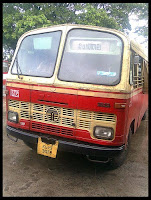 Email ThisBlogThis!Share to TwitterShare to FacebookShare to Pinterest
This post is about: big brother, bus, Kerala, rash, reckless, roads

Truly...its a big relief that there is a proper order for bus traffic....very nicely put to words....even had a suspense till the last word!....my thoughts fled from big brother(sibling rivalry), Don ( a billa may be), and finally realised its our bus brothers!

the Bus is indeed the grandpa of the road...right of way, no matter what!!!

Ha ha!!Big Brother indeed;) You know in the beginning I thought its your big brother that youre talking about..even I was scared;)
jokes apart, thanks for funny and peppy start of a new day!!!!

I like this one!
Love him or hate him, big brother brings me to office everyday! I dare not say anythign about him! :D

Did you know that he has a bigger brother, the tippers who rush, kill and cre less while they bring loads for the developing Kochi. Superb post :)

I am scared to death by these big brothers!! Travelling in them is nothing short of a nightmare!
Loved the way you described our Kerala buses!!:-)

bigB, I'm glad u liked the suspense. But I don't think there's proper order for bus traffic yet. They still are mean and bossy, literally pushing you off the road. Thanks bigB for stopping by.

Rush, A rugged grandpa at that!

A New Beginning, He literally gives me a fright every morning & evening I drive home-office-home. I'm glad to have given you the peppy start today.

Destiny's child, Yeah...u r one of the amicable people, aren't you?!

Holy Lama, I dread the big brother and his bigger brother equally. Glad you like the post.

Novice Writer, A nightmare indeed! Yday's drive back home and the close brush I had with the big brother inspired me to write, right away.

Cute post! You had me going there for a little while.

Ah ! I have always felt that the likes of Schumacher and Alain Prost sowed their wild oats in Kerela. Or their forefathers did !

And they now have taken to driving those red buses ! I am usually petrified, driving on the highways down there !

Thrice between Kottayam and Trivandrum, on three separate journeys, i almost heard the Ambulance say, 'we are coming over' !

All of that came back ! whilst reading this !

Kavi, Mmmm... interesting perspective! And yeah it's an awfully frightful experience driving down here in Kerala, whether on the highway or on the narrow roads that look more like lanes. Everyday, when I get back home safe, I'm like "thank God!" Thanks for stopping by.

Thanks for stopping by my blog...glad u liked the poem

Regarding this post...it was quite an interesting read...the big bros care for none, they r very selfish:) wish v could do a raksha bandhan ceremony for them(read raksha bandhan as rakshapedal )

Ananya, you're right the big bros are rather merciless. I wouldn't want to make truce with them. Not me.